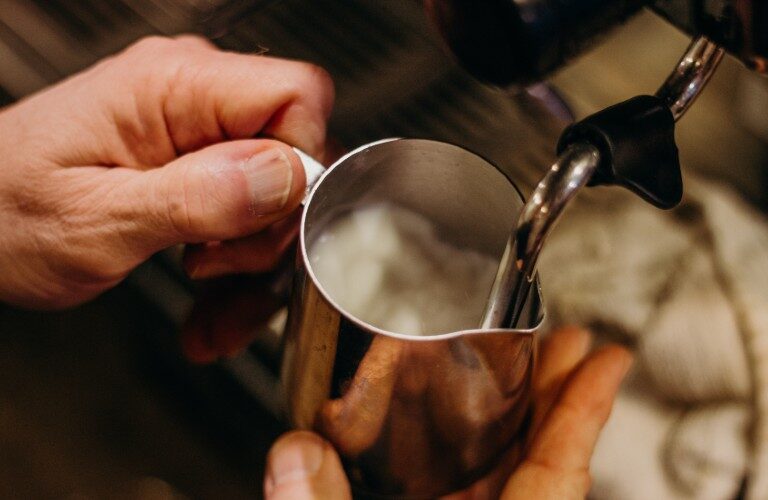 How To Make Frothed Milk.

Few coffee drinkers realize that frothed milk is what gives a cappuccino or latte its distinctive flavor. It’s just plain espresso without the milk and foam. It takes some practice, just like anything worthwhile to learn; even the most capable baristas struggle at first. Let’s look at the frothing procedure.

Most experts agree that starting with a stainless-steel pitcher, cold milk, and an espresso machine with a steaming wand is the best way to go. After that, there are as many different perspectives on the frothing process as there are espresso blends.

Although stainless steel is preferred for its maneuverability, any non-plastic container will suffice as long as it does not melt or crack when exposed to heat. The type of milk you use depends on the foam texture you want to achieve.

The higher the fat content, the denser the milk will be and the more difficult it will be to froth. Skim milk produces a light, airy foam that is probably the easiest to master for beginners.

To figure out how much milk you’ll need, half-fill the cups you’ll be drinking from with the amount of milk the drink calls for. A cappuccino, for example, is made with half espresso and half steamed milk, so you’d fill the cup one-fourth full of cold milk because steaming causes the milk to roughly double in volume. Fill the pitcher with milk.

It’s critical that the steam wand’s tip is consistently held just below the milk’s surface. If the milk is held too long or too hot, it will scorch or boil before it froths. It will blow the milk out of the pitcher and make a mess if it is not deep enough. Keep your free hand’s palm flush with the pitcher’s bottom. This will allow you to keep an eye on the milk’s temperature without interrupting the process. As the milk expands, pull the pitcher away from the machine to keep the wand’s tip just beneath the surface. If the milk is about the same temperature as your palm, dip the wand deeper into it to warm it up. Turn off the steam and tap the pitcher against the work surface if the pitcher becomes too hot. This helps cool the milk by allowing large bubbles to escape. It’s critical that the milk never boils.

Add the milk to the drink, carefully holding back the froth with a long-handled spoon. Make sure you pour in a steady stream. The desired amount of froth on top of the drink can be added with a spoon, but if the frothing is done properly, the result is a fine micro foam that can be poured directly from the pitcher. Any drink can benefit from the addition of cinnamon, nutmeg, or grated chocolate.

No comments to show.